Solaris Optics S.A. has the Magneto Rheological Finishing (MRF) machine in its machines park. The MRF machine gives the ability to gently correct optical elements and therefore ultraprecise optics manufacture – the answer for the most demanding customer needs.

The MRF has a number of different applications

The use of different polishing liquids gives the ability of polishing the numer of different types of crystalline and glass materials. They can be very soft such as Calcium or Magnesium Fluoride or very hard such as Silicon Carbide or Sapphire.

The input metrology for the machine is the interferometric map. Basing on the map, the MRF machine tool path is being created in such a way to polish the element peaks longer and the element valleys shorter.
The combination of non – deterministic classical pitch polishing that gives very smooth and low spatial frequencies surface and and highly deterministic MRF polishing gives the ability of achieving in Solaris optics top quality optical surfaces. 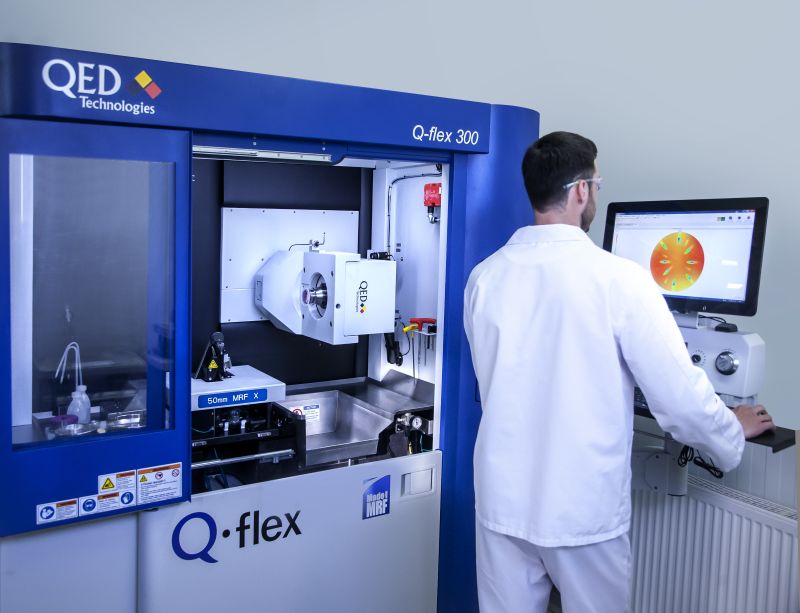 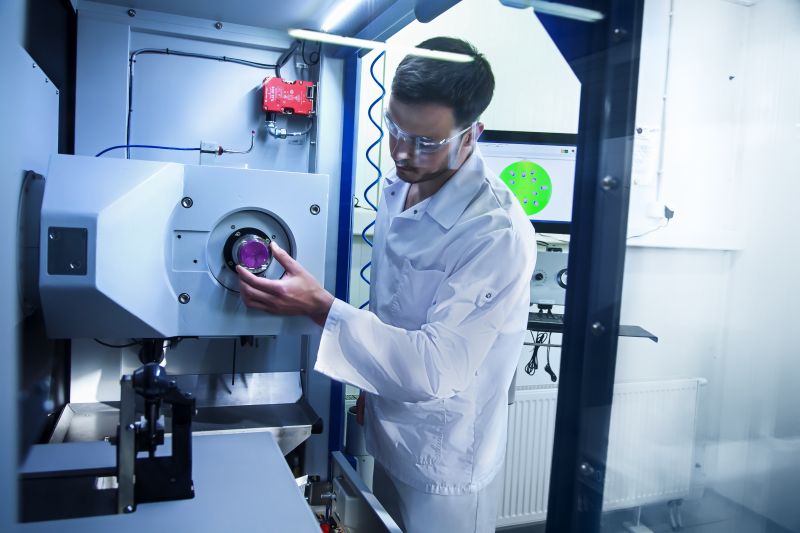 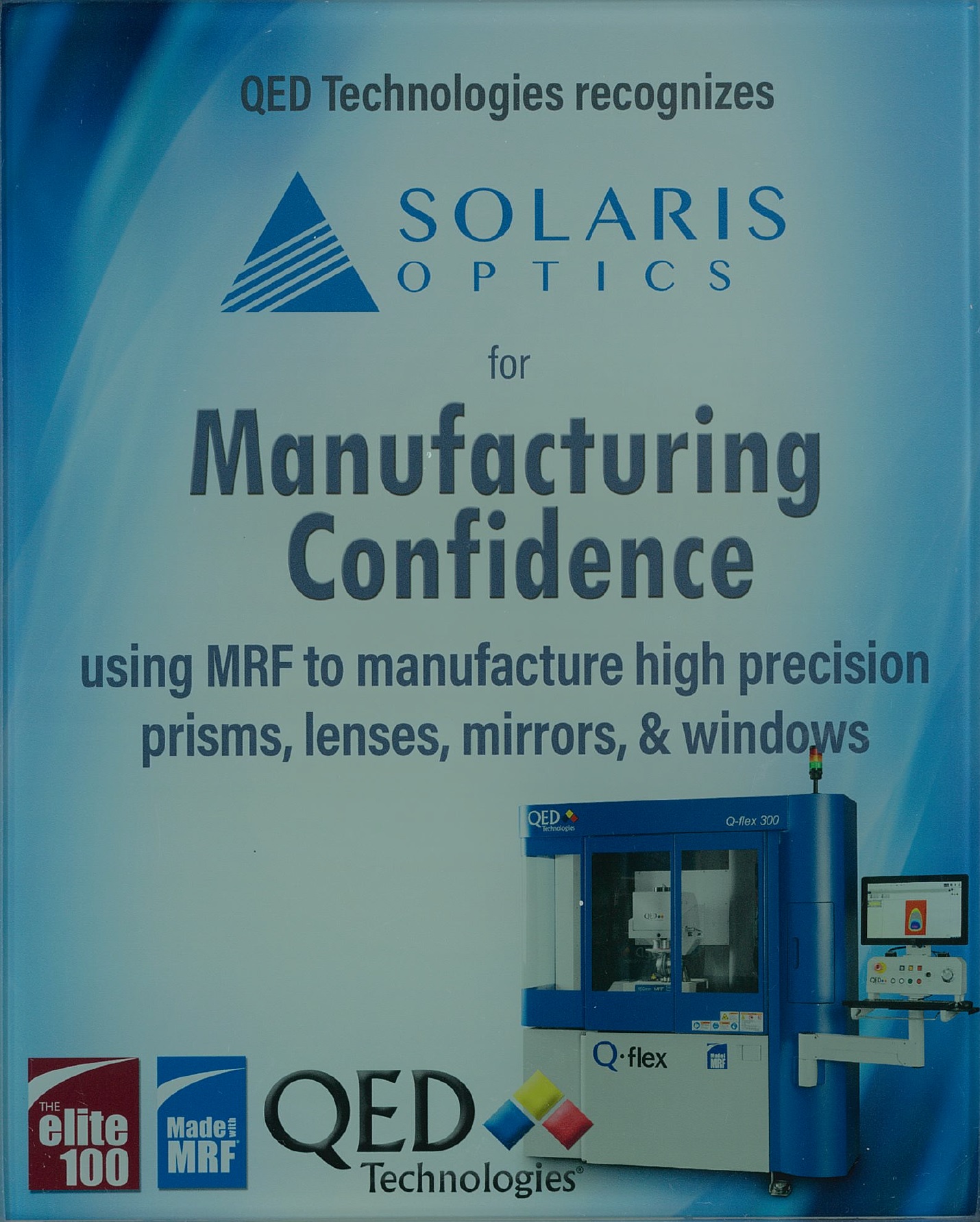 Magnetorheological finishing (MRF) allows ultra-precise manufacturing over a range of optical designs, apertures, and materials at the highest surface quality and sub λ/20 accuracy. With the addition of Q-Flex 300 MRF to its machine park, Solaris Optics added a new level of capabilities to its portfolio. Below we describe main MRF applications in optics from proof-of-concept until today.

The exciting history of magnetorheological finishing technology, as we know it nowadays, started in Belarus. In 1974 an Ukraine-born Belarussian scientist William Kordonski started his works on magnetorheological fluids. His research had little to do with optics though. Nevertheless in 1986 he learned that a spacecraft project needs aspheric optics for surveillance purposes. Hence, four years later the first MRF machine was ready in Minsk, Belarus. Thereby aspheric lens finishing was the first application of MRF in optics. Still it took almost a decade of R&D works in the USA until the first commercial magnetorheological finishing installation in 1998. The R&D then further continued and the exciting history of MRF technology development and commercialization can be found here.

Today MRF technology is industry-available and has applications throughout the world. The process shall be considered by OEMs and companies interested in high-performance optics. Those who want to ensure their design is converted into physical form without any manufacturing errors. Solaris Optics can support its clients with MRF capabilities across entire product life cycle from prototype to serial production.

Sub-aperture polishing is defined as removing material from one region at a time, rather than from the entire surface. The material removal is performed using magnetorheological fluids, which are suspensions that contain magnetizable particles and a polishing agent in low-permeability base fluid. An optical element is placed at a distance from a rotating wheel that holds an electromagnet below its surface. The MR fluid is applied via nozzle at the rotating wheel and because of the magnetic field, the particles are pulled against the wheel surface so that a polishing layer is formed on the fluid surface. The position of the workpiece is controlled via advanced algorithms so the workpiece can be machined locally for greater flexibility.

What sets the MRF technology apart is precision fit for most demanding applications, while keeping production times and costs low. It allows manufacturing optics with accuracy and surface roughness quality that can be hardly matched by conventional processes. MRF finished optics can yield figure error down to ~1 nm RMS, mid-spatial frequency errors to ~1 mm and surface roughness to ~1 Å RMS. MRF is also a stable and repeatable process, ensuring high yields and throughput for both unit and serial production.

MRF technology offers flexibility for polishing and correction of variety of optics, starting from classic geometries such as spheres and flats to complex ones like aspheric optics or free form optics. Whether it’s creating new components or correcting aberrations on existing lenses or mirrors, this versatility is reflected in wide range of applications it can serve. As in the early-stage example, MRF is widely recognized as a go-to process for high-precision, custom designed aspheric optics. Aspheric optics is harder to produce, but offers lowest wavefront errors and can replace several spherical lenses, resulting in lighter and smaller systems in application areas including medical equipment, scientific devices, high power lasers, space, military and much more.

One of the key MRF applications and markets is in life and health systems, where optics are enablers of sophisticated analytical and clinical uses. This includes broad range of instrumentation, such as microscopy, spectroscopy, molecular imaging, OCT, x-ray and more.

The other promising field of MRF application is LiDAR (Light Detection and Ranging) systems. The LiDar technology is a multi-billion market poised for dynamic growth in the upcoming years. It is used in autonomous cars and advanced mapping solutions. Because accuracy and resolution are key demand for distance and range measurement, especially when user safety is at stake, the performance tolerances for optics are extremely strict.

Another large and dynamically developing market where MRF is oftentimes applied is space systems.

Solaris Optics is the only MRF operator in Poland. We already have a proven track record of using MRF machine for high precision applications, especially for space related uses.

Our flagship project to demonstrate capabilities of MRF process was manufacturing high precision cylindrical mirrors. The mirrors were delivered to the second largest optical-infrared space observatory in the world (Paranal Observatory). Using MFR with combination of stress mirror polishing, five mirrors were produced with full aperture PVr of just 22.4 nm. More on this project MRF Polishing for Manufacturing Optical Cylinders.

Yet another application where Solaris Optics applied MRF is manufacturing of imaging optics for a super tele-objective, a system aimed at Earth observation from space. This time we reduced the dimensions and weight of the system by aspherizing lens surfaces with MRF. See more here Super Tele-Objective for Earth Observation.

The projects are examples how well MFR process can adapt to existing machine park to meet most demanding optical requirements. As we can also see, today’s MRF applications in optics have not come far away from its root uses.